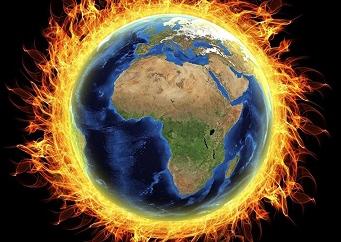 A new study has warned that Earth is at the risk of entering an irreversible 'hothouse' condition, where the global temperatures will rise by four to five degrees and sea levels may surge by up to 60 meters higher than today,  even if the targets under the Paris climate deal are met.

According to the researchers, keeping global warming to within 1.5-2 degrees Celsius may be more difficult than previously assessed.

Human-induced global warming of two degrees Celsius may trigger other Earth system processes often called feedbacks that can drive further warming even if greenhouse gases emissions are stopped. Avoiding this scenario will require redirection of human actions from exploitation to stewardship of Earth system.

The study considers ten natural feedback processes, some of which are tipping elements that lead to abrupt change if a critical threshold is crossed. These feedbacks can turn from being a friend that stores carbon to a foe that emits it uncontrollably in the warmer world.

Water discovered in the atmosphere of habitable exoplanet 'K...