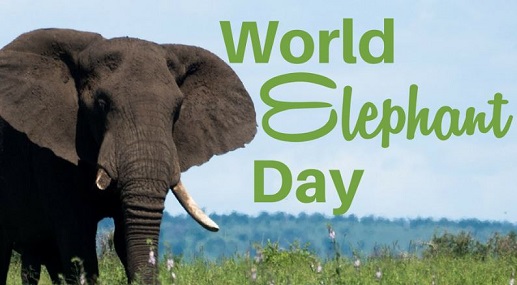 The World Elephant Day is observed every year on 12 August around the world to create awareness of the urgent plight of African and Asian elephants.

The World Elephant Day also aims to share knowledge and positive solutions for better care and management of captive and wild elephants. It highlights the need for better protection for wild elephants, improving enforcement policies to prevent the illegal poaching and trade of ivory, conserving elephant habitats, better treatment for captive elephants etc.

The first World Elephant Day was held on 12th August 2012. This day was first conceived in 2011 by Michael Clark and Patricia Sims, two filmmakers from Canada, as well as Sivaporn Dardarananda, Secretary-General of the Elephant Reintroduction Foundation in Thailand.

In India, cultural event Gaj Mahotsav was organised by Wildlife Trust of India (WTI) and Ministry of Environment, Forests and Climate Change (MoEFCC) on this occasion of this day. It was aimed to sensitise people urgent plight of elephants through different art forms including the exhibition of elephant-themed paintings and installations.

Indian elephant (Elephas maximus indicus) is one of three recognized subspecies of the Asian elephant and native to mainland Asia is national heritage animal of India (declared in 2011).

Maharashtra to Madhya Pradesh A tiger has set a new record i...

» Gaj Yatra Campaign Flagged Off In Garo Hills Of Meghalaya