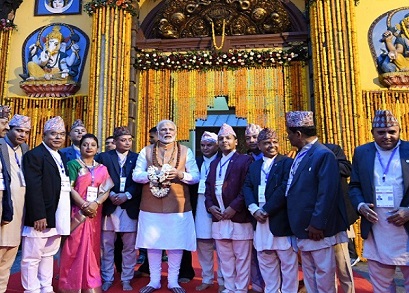 Nepal-Bharat Maitri Pashupati Dharamshala is a rest house for pilgrims in Kathmandu, built with Indian assistance. It is located on banks of Bagmati River.

Pashupatinath temple is dedicated to Lord Shiva (also known as Lord Pashupatinath, Nepal’s national deity). It is one of the four most important religious sites in Asia for devotees of Shiva.

Pashupatinath temple was built in the 5th century and later renovated by Malla kings.  It largest temple complex in Nepal, it stretches on both sides of Bagmati River which is considered holy by Hindus.

Jyotirlinga at Pashupatinath is considered as head over twelve Jyotirlinga (in India) which are different body parts. The main pagoda style temple has a gilded roof, four sides covered in silver and wood carvings of the finest quality. Temples dedicated to several other Hindu and Buddhist deities surround the temple of Pashupatinath.