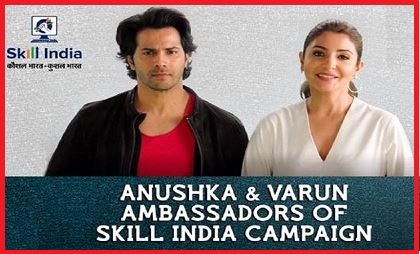 Bollywood actors Varun Dhawan and Anushka Sharma were signed as the ambassadors of Skill India Campaign to promote and endorse the Skill India Mission, chaired by Prime Minister Narendra Modi.

Varun Dhawan and Anushka Sharma, through their film ‘Sui Dhaaga-Made in India’, are saluting India’s entrepreneurs and skilled workforce, especially homegrown artisans, craftspeople and weavers who are making the country proud the world over.

The Sui Dhaaga movie highlights the untapped potential of India’s talented craftsmen and skilled workers at the grassroots level and the challenges and issues faced by them.

Varun Dhawan and Anushka Sharma, the star cast of the film, have partnered Skill India and will dedicate time to promote India’s skilled talent and their fine work by engaging with them across different parts of the country.

Skill India is a campaign launched by Indian Prime Minister Narendra Modi on 15 July 2015 which aim to train over 40 crore people in India with different skills by 2022.

Skill India Organized 'Ajeevika And Kaushal Vikas Mela' In B...

Ministry of Skill Development and Entrepreneurship of India-...

India to send 3 lakh youth to Japan for on-job training for ...

Rajasthan has become the first state to incorporate skill de...