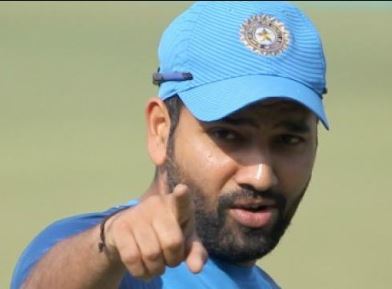 Rohit Sharma is an Indian cricketer and is currently the Indian ODI and T20 teams’ vice-captain. He also serves as the captain of the IPL team Mumbai Indians.

Rohit Sharma has a number of records under his name. He has scored 3 double-centuries in ODIs, in addition, to the centuries in T20 and Test formats too.

Rohit Sharma having the hard-hitting ability, he is also famously known as ‘The Hitman.’

Rohit Sharma gained recognition right from his early days. He started at a mere age of 20 and soon was getting praises for his mature and calm performance.

Rohit Sharma was born on 30 April 1987 (age 31 years), in Nagpur, Maharashtra, in a middle-class family.  Initially, he was trained under Dinesh Lad, a cricket coach, who also supported him financially to get admission into Swami Vivekanand International School.

Rohit Sharma made his debut in the ODI format against Ireland at Civil Service Cricket Club, 23 Jun 2007.

Rohit Sharma made his debut in the T20I against England at Kingsmead, 19th September 2007

Rohit Sharma was honored with ‘Arjuna Award’ in 2015.

Rohit Sharma is the only individual to score 264 in ODIs.

Rohit Sharma is the only Indian who has centuries in all formats of cricket, other than Suresh Raina.