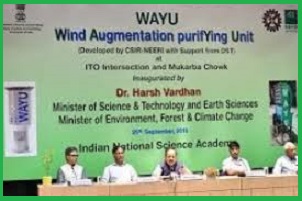 The WAYU device aims at tackling toxicity in the air by sucking in particulate matter and release fresh air.

WAYU device has been indigenously developed by Council of Scientific and Industrial Research-National Environmental Engineering Research Institute (CSIR-NEERI) as part of Technology Development Project being funded by the Department of Science and Technology.

WAYU device prototype has the capacity to purify the air in the area of a 500-meter square. It consumes an only half unit of electricity for 10 hours of running and has a maintenance cost of only Rs. 1500 per month.

The WAYU device has one fan and filter for sucking and removing PM. It also has two UV lamps and half kg of activated carbon charcoal coated with special chemical Titanium Dioxide.

CSIR-NEERI is in the process of developing a bigger version of WAYU which can purify the air in the area of 10,000 meter square. It will also make designs of future WAYU devices better in aesthetics and can be deployed in bus shelters etc.

» IBM & Indian IT firms collaborates for its Call for Code Initiative: Details, Aim