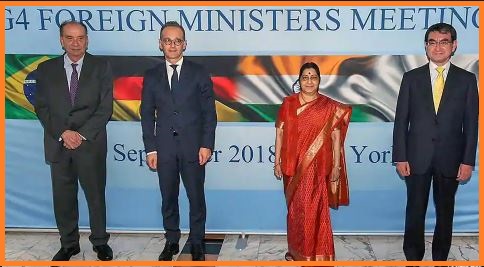 It was convened during the meeting of Ministers from four G4 Countries which was hosted by External Affairs Minister Sushma Swaraj at Indian Mission to UN to review the reform progress.

Ministers from G4 countries reaffirmethe d need for early reform of UNSC including expansion of both permanent and non-permanent categories of membership to enhance its legitimacy, effectiveness and representativeness in order to safeguard legitimacy and credibility of UNSC which deals with international peace and security.

G4 Ministers discussed pathways to reform UNSC and tasked their diplomats to consider way forward to advance the reform process known as Intergovernmental Negotiations (IGN). They also agreed to initiate text-based negotiations to safeguard the legitimacy and credibility of the powerful UN organ.

The G4 nations comprise of Brazil, Germany, India, and Japan which support each other’s bids for permanent seats to United Nations Security Council.

G4’s nations primary aim is permanent member seats on Security Council. Each of these four countries have figured among elected non-permanent members of UNSC since UN’s establishment.

However, G4’s bids are often opposed by Uniting for Consensus movement or Coffee Club (ground 12 countries including Pakistan led by Italy) and particularly their economic competitors or political rivals.