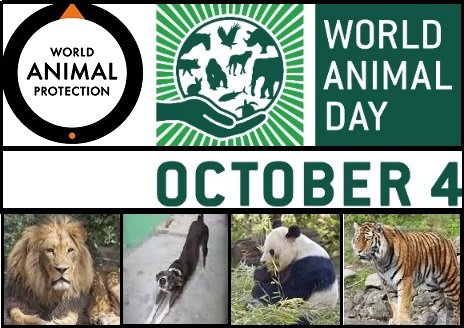 The World Animal Day or 'World Animal Welfare Day' is observed on 4th October every year around the world as a day of action recognised worldwide for animal rights as well as welfare. The day is also known as 'Animal Lovers Day'.

The World Animal Day observance also marks the Feast Day of St Francis of Assisi, the patron saint of animals.

The World Animal Day main is to improve animal welfare standards worldwide through the support and involvement of individuals, groups, and organisations that care for and love animals. It also urges to conserve the endangered species of animals.

The World Animal DayThe World Animal Day celebrates the relationship between humankind and animal kingdom. On this day, many activities are performed during the day, such as the launching of animal welfare campaigns, an opening of rescue shelters for the animals, and organisation of fund-raising events.

Also, schools and colleges prepare visual displays with wildlife information. Even many organizations volunteer to sponsor the construction of the shelter to the animals.

Animal Law: In India, the “Prevention of Cruelty to Animals Act, 1960” was laid to protect the animals.