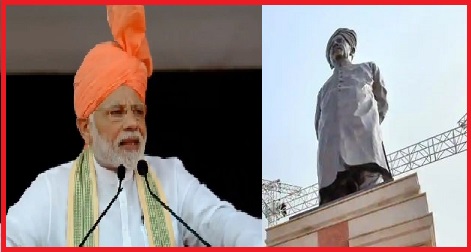 Around 5,500 farmers from Haryana had donated iron metal, ranging from half-a-kg to two kgs for construction of Sir Chhotu Ram Statue.

Sir Chhotu Ram was born on 24th November 1881, as Ram Richpal in Garhi-Sampla, Rohtak in then Punjab, British India (now in Haryana) and died on 9 January 1945 at the age of 63 years in Lahore, British India (NOW Pakistan).

Sir Chhotu Ram is regarded as a messiah (ALMIGHTY) of peasants and was instrumental in empowering farmers in the pre-Independence era and getting a pro-farmers law enacted. He had fought for farmers’ rights during the British rule.

Sir Chhotu Ram was an ideologue of peasants of pre-Independent India and championed interest and cause of oppressed peasants of Indian Sub-continent. For this feat, he was knighted (given the title of Sir) in 1937.

On a political front, he was a co-founder of National Unionist Party ((Zamindara League)) which ruled United Panjab Province in pre-Independent India and kept Congress and Muslim League away from power.

Sir Chhotu Ram was popularly known as Deen Bandhu (in Urdu as Rahbare Azam, which translates as a messiah of poor).