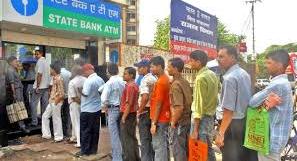 Portal BookMyChotu.com to provide helper to stand in queues in Delhi

A new portal has been launched which provides helpers to stand in queues and in return to that Rs.90 per hour is charged by the helper.

The people are suffering to stand in long queues for hours and in Banks and ATMs to exchange, deposit or withdraw the money.

This new portal BookMyChotu.com provides the helpers for various jobs to stand in queues of ATM at the Delhi NCR region.

The company ads a disclaimer that chotu is just a brand name, there is no intention to hurt anyone’s sentiments.

The helpers are above 18 years of age and they have no objection of this name ‘Chotu’.

This portal is a help to those who are busy in their professional life and are not ready to stand in queues.

» Note ban results in 40% reduction in consumption of cigarette

» Note Ban: Procedure to use mobile banking with mobile phones

» Note Ban: Steps and procedure to use Micro ATM to withdraw cash