Nikki Haley appointed as US Ambassador of United Nations 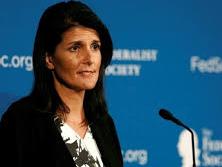 Nikki Haley is the Indian American Governor of South Carolina, the youngest Governor at the age of 44.

Haley is considered as one of the most rising stars of Republican Party and is born as Nimrata Nikki Randhawa to Sikh immigrates.

Donald Trump held a meeting in New York with Nikki Haley as a part of round meeting with other potential officials of the cabinet.

Haley’s parents earlier lived in Punjab but then migrated to South Carolina.