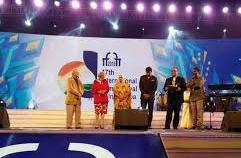 The film Daughter is an Iranian film which has been directed by Reza Mirkarimi which is the family drama set of southern Iran.

The film depicts the conflict between a strict father and a young daughter.

Other categories for the award were special jury award which was awarded to film ‘The Throne’, Best Actor in Female is presented to Elina Vasca and in Male, it is awarded to Farhan Aslani.

Special Jury mention award is awarded to Tiffany Hsuing for the Korean Movie ‘The Apology’.