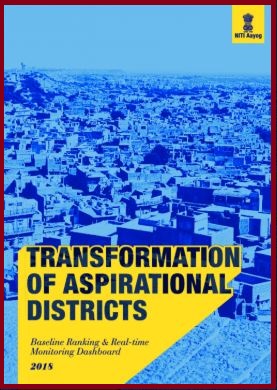 Niti Aayog has released the Second Delta Ranking of the Aspirational Districts Programme. The ranking details the incremental progress achieved by the districts during June to October this year across six key development sectors.

The districts have been ranked on a transparent basis on parameters across various performance indicators like Health and Nutrition, Education, Skill Development and Basic Infrastructure among others.

The rankings are based on the data that is publicly available through the Champions of Change Dashboard, which includes data entered on a real-time basis at the district level.

Top performers: Virudhunagar district in Tamil Nadu has shown the most improvement overall, followed by Nuapada district in Odisha, Siddarthnagar in Uttar Pradesh, Bihar’s Aurangabad and Koraput in Odisha. These districts have championed the development narrative in fundamental parameters of social progress.