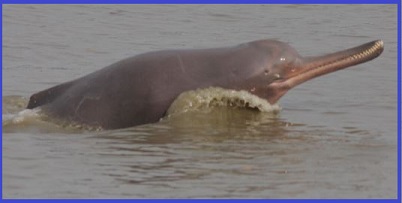 According to a recently conducted study, the rise in salinity in the water system that makes the Indian Sunderbans has resulted in the decrease of population of the Ganges River Dolphins (GRDs) in the region.

The national aquatic animal is no longer sighted in the central and eastern parts of the Sunderbans region. Only in the western part of Sunderbans, where the salinity is lower, could researchers find some evidence of the species.

The hyper-saline zone in the central part of the Sunderbans, which includes areas such as Raidighi and Patharpratima has lost connectivity with the upstream freshwater flow.

The study shows how natural changes including the phenomenon of climate change and human interventions in the Indian Sunderbans are having an adverse impact on the habitat of the species.

The rise in sea level, triggered by climate change, is one of the reasons for the increase in the salinity of waters of rivers and channels. Hydrological modifications like water diversion and commission of large barrages upstream have had a great impact on the salinity profile of the rivers downstream in the Sunderbans.

Gangetic river dolphins fall under Schedule I of the Indian Wildlife (Protection) Act. It has been declared an ‘endangered’ species by the International Union for Conservation of Nature (IUCN).

The Gangetic river dolphin is one of the four freshwater dolphin species in the world. The other three are found in the Yangtze river, the Indus river in Pakistan and the Amazon river.