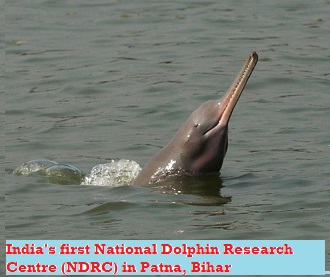 Asia’s & India's first National Dolphin Research Centre (NDRC) will be established on the banks of the Ganga river at Patna University campus in Patna, Bihar.

It was announced on the occasion of Dolphin day on 5th October 2018, which was observed in Bihar for protection and conservation of Gangetic river dolphin to create awareness to save endangered species.

NDRC will play a vital role in strengthening conservation efforts and research to save endangered mammal whose population is decreasing. Bihar is home to around half of the country’s estimated 3,000 dolphin population.

Ganges river dolphin is India’s national aquatic animal. It is almost completely blind and finds its way and prey using ultrasonic echoes, with the sound being everything for them to navigate, feed, escape danger, find mates, breed, nurse babies and play.

Ganges river dolphin falls under Schedule I of the Indian Wildlife (Protection) Act and have been declared an endangered species by the International Union for Conservation of Nature (IUCN).

Union Environment Ministry had launched the Ganges River Dolphin Conservation Programme in 1997 to build a scientific database of their population status and also study their habitat quality of the dolphins’ distribution range.