Smriti Mandhana is ICC Women’s Cricketer of the Year 2018 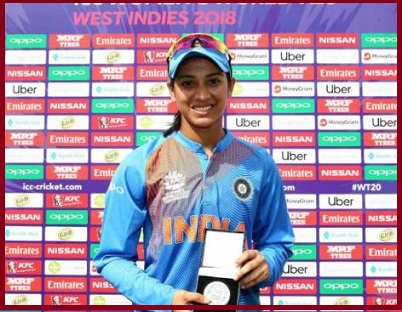 India Women Cricket team Vice-captain and Left-handed opener, Smriti Mandhana was adjudged ‘Rachael Heyhoe Flint Award for the Women’s Cricketer of the Year‘ as well as the ‘Women’s ODI Player of the Year’by the International Cricket Council (ICC).

Smriti Mandhana (22-year-old)  scored 669 runs in 12 ODIs along with 622 runs in 25 T20 Internationals in 2018 and became the second Indian woman to win an ICC award after fast bowler Jhulan Goswami, who was named the ICC Women’s Player of the Year in 2007.

Besides this Harmanpreet Kaur of India who spearheaded her side to the semi-finals of the ICC Women’s World T20 2018 held in the Caribbean in November 2018, has been named the captain of ICC Women’s T20I Team of the Year.

Rumana Ahmed is the first Bangladesh player to have been selected in the ICC T20I Team.

Anjum Chopra, Snehal Pradhan were the Indians in the voting academy comprising of former players, members of the media and broadcasters that selected the ICC women team 2018 and awardees for the ICC Women Cricket 2018.

The other awardees in different categories of the ICC Women Cricket 2018 are: