Dictionary of Martyrs of India’s Freedom Struggle From1857-1947 Released 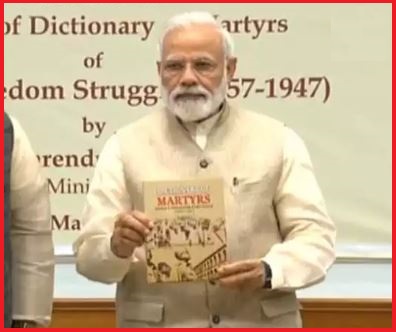 The  5-volume dictionary contains an account of the martyrs from India’s First War of Independence in 1857, to India’s Independence in 1947. This is the first ever attempt by the Government to compile the names of martyrs on this scale.

The dictionary includes the names of freedom fighters of the Azad Hind Fauj who attained martyrdom.

The dictionary includes ex-INA or ex-military personnel who died fighting the British.

Volume 1: More than 4400 martyrs of Delhi, Haryana, Punjab, and Himachal Pradesh have been listed.

Volume 3: The martyrs covered in this volume are more than 1400. This volume covers the martyrs of Maharashtra, Gujarat, and Sind.

Volume 4: The martyrs covered in this volume are more than 3300. This volume covers the martyrs of Bengal, Bihar, Jharkhand, Odisha, Assam, Arunachal Pradesh, Manipur, Meghalaya, Nagaland, and Tripura.

Volume 5: The martyrs covered in this volume are more than 1450. This volume covers the martyrs of Andhra Pradesh, Telangana, Karnataka, Tamil Nadu, and Kerala.