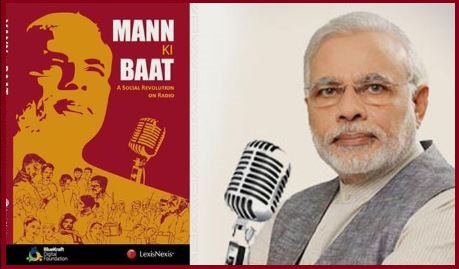 The book is a 50 Episodes Special Edition of the 'Mann Ki Baat' programme by Prime Minister Narendra Modi on All India Radio.

The book depicts light on various aspects of Prime Minister’s outreach, the remarkable response it continuously received from the people, the mass movement it has inspired and the profound impact it ingrained in the minds and hearts of the youth of India.

The book also gives insight into behind the scene research work done on the massive public feedback received through various channels after every episode of Mann Ki Baat, which had aired first on 3rd October 2014.

The book also gives a rare and exclusive opportunity to readers to discover several unknown facets of Prime Minister’s thinking and beliefs related to ‘Mann Ki Baat’, revealed by him to the authors of the book. The insights that emerge from the transcripts of the radio address are the most important contribution of this book.

The book has been collated by BlueKraft Digital Foundation, a not for profit organization, and brought out by Rupa Publication, India, a reputed publishing house.