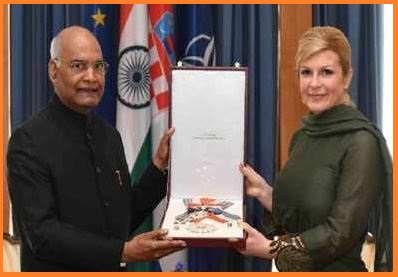 Indian President Ram Nath Kovind has been honored with Croatia’s highest civilian award the Grand Order of the King of Tomislav.

Croatia’s highest civilian award the Grand Order of the King of Tomislav is awarded to heads of state for their important contribution towards the development of state relations between Croatia and their respective countries.

President Kovind is the first-ever Indian head of state to visit Croatia.

2016 - Rosen Plevneliev (as President of Bulgaria)

2013 - Bronisław Komorowski (as President of Poland)

2011 - Giorgio Napolitano (as President of Italy)

Croatia is situated in the northwestern part of the Balkan Peninsula and its capital is Zagreb.

Croatia was constituent of the Socialist Federal Republic of Yugoslavia. Croatia declared independence from Yugoslavia On 25 June 1991.

Croatia is a republic governed under a parliamentary system is a member of the European Union (EU), the United Nations (UN), the Council of Europe, NATO, the World Trade Organization (WTO), and the Union for the Mediterranean.