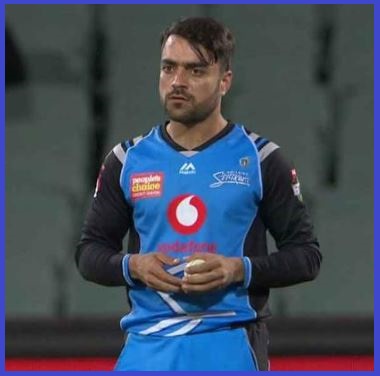 Rashid Khan full name as 'Rashid Khan Arman' is an International Afghanistani cricketer who plays for the Afghanistan national cricket team. Currently, he is also leading his country as a captain in Twenty20 Internationals (since April 2019).

Rashid Khan was born on 20th September 1998 (20-years-old) who hails from Nangarhar, Afghanistan. He grew up playing cricket with his brothers and idolized Pakistani all-rounder Shahid Afridi, from whom he stylized his bowling action.

Rashid Khan as a bowler so far has taken 10 Test wickets, 123 ODIs wickets, 76 T20Is wickets and 58 wickets in IPL. He also scored 1000 runs in total as a batsman in international cricket.

Rashid Khan in February 2018, he became the youngest player to top the ICC Player Rankings for bowlers in ODIs.

Rashid Khan also topped the ICC Player Rankings for bowlers in T20Is. In September 2018, he became the number one player in the ICC's all-rounder rankings, following his performance at the 2018 Asia Cup.

Recently, in April 2019, Rashid Khan was selected as most deserving player to participate in Afghanistan's squad for the 2019 Cricket World Cup.

Shikhar Dhawan has become the first Indian opener to have sc...