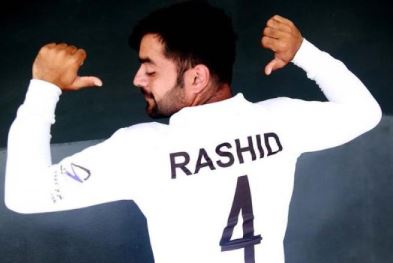 Rashid Khan full name 'Rashid Khan Arman', an International Afghanistani cricketer who plays for the Afghanistan national cricket team has become the youngest captain ever in the Test Cricket history.

Rashid Khan (20-year-old) is Afghanistan’s leg spinner, who broke the 15-year-old record of Zimbabwe wicketkeeper Tatenda Taibu. He was holding this record for more than the last 15 years.

Rashid Khan was given this responsibility because Afghanistan skipper Asghar Stanikzai was diagnosed with appendicitis disease.

Rashid Khan as a bowler so far has taken 10 Test wickets, 123 ODIs wickets, 76 T20Is wickets and 58 wickets in IPL. He also scored 1000 runs in total as a batsman in international cricket.

Rashid Khan in February 2018, he also became the youngest player to top the ICC Player Rankings for bowlers in ODIs.

India delivers the first pair of Mi-24 attack helicopters to...

India & Afghanistan MoU in the field of human resource d...

According to an international report, Pakistan is the most d...