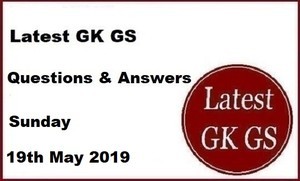 2. When was Lok Sabha Election 2019: 7th and final phase polling and conducted for how many constituencies?

3.  Which Indian movie won the third prize in the international section of Nespresso Talents 2019 in Cannes?

4. Which Indian names were named as ICC commentators for Cricket World Cup 2019?

5. In ICC World Cup 2019 for the first time, every team will have which officer?

6.  China has blocked all the language editions of which online encyclopedia?

7. Which nation has banned headscarf in primary schools?

8. Which sportsperson received the Knighthood on 16th May 2019?

9. What is the name architect regarded as a pillar of modern architecture, passed away at 102 years in the US

10. Which nation would be hosting the 2023 Asian Football Cup?

11.  Which aerial vehicle was flight tested successfully by DRDO?
Ans:- ABHYAS
12. When the National Dengue Day is observed every year in India?

14. When is the International Museum Day celebrated every year?

15. When is the World AIDS Vaccine Day is Celebrated Every Year?