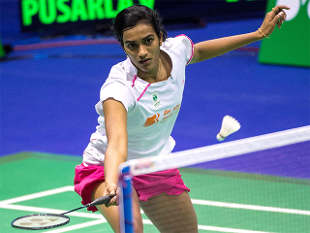 PV Sindhu worked very hard for the match but could not secure her position in the finals.

Sung Ji Hyun had a five point advantage at the break in the final game where she leads 11-6 over PV Sindhu.

At 13-9 to Sung, PV Sindhu feels the pressure at the moment and which made her lose the match.

In the second game, PV Sindhu leads by a narrow margin by 11-10 and then suddenly PV Sindhu and Sung Ji Hyun made extensive shots and made the score 13-13, then 18-18 and then two game points were given for PV Sindhu where she won by 21-18.