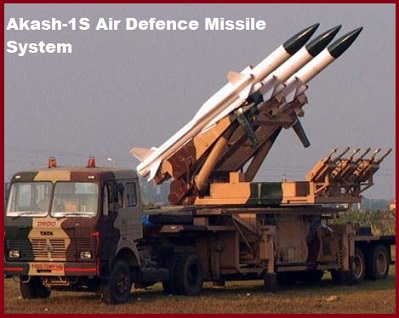 Air Defense System, this system is used to protect against any type of air attack. Under it, two things are extremely special. The first radar and the second missile

Akash-1S is a new version of the missile which is fitted with an indigenous seeker.

Akash-1S missile system got developed by the DRDO, and has the capability to neutralize aerial targets such as fighter jets, cruise missiles, and air-to-surface missiles as well as ballistic missiles.

Akash-1S The Akash-1S missile system is capable of striking down enemy fighter jets and drones very effectively and accurately.

The Akash surface-to-air missile was designed to intercept enemy aircraft and missiles from a distance of 18 to 30 km.

Akash missile system has already been deployed by IAF at its bases in Gwalior, Hashimara, Tejpur, Jorhat, and Pune since 2013.

Earlier on 24 May, DRDO successfully test-fired an indigenously-developed 500 kg class guided bomb from a Sukhoi combat jet at Pokhran in Rajasthan and the Indian Air Force (IAF) has successfully test fired the aerial version of the supersonic BrahMos cruise missile from a Sukhoi fighter jet on 21st May 2019