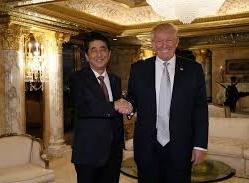 Abe stated that japan-US alliance is the axis of Japan’s diplomacy and security and would like to build trust with Trump.

This was an unofficial visit of Shinzo Abe at US as Trump has not yet assumed as Presidency.

Shinzo Abe stressed on building Japan-US relationship of trust with Donald Trump as a president.

This was the first foreign meeting of Donald Trump after the Presidency with Japan.

Trump has suggested Japan to share financial burden of US’s military in the region.

Abe stated that he is honoured to see the President elect ahead of other World leaders.