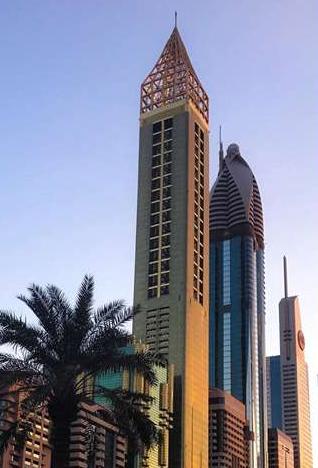 Dubai the largest city in the United Arab Emirates (UAE) unveiled its new built Gevora Hotel, which became the tallest hotel in the world.

The Gevora Hotel is situated at 101 Sheikh Zayed Road near the Dubai International Financial Centre. It got opened for guests check-in on 12th February 2018.

The Gevora Hotel has been built by builder Majid Al Attar.

The Gevora Hotel, glittering gold 75-storeys tower stands 356 metres and 53 centimetres tall. It has gold-plated revolving doors, its decor and ambiance are maintained to luxurious.

The Gevora Hotel will have 528 guest rooms which include 232 Deluxe Rooms, 265 One-Bed Deluxe Rooms and 31 Two-Bedroom Suites. It will also have a Pool, Jacuzzi, Health Club as well as a Luxury Spa.

The Gevora Hotel has four restaurants offering international and local cuisines. The highest view restaurant is located at the rooftop, giving a panoramic view over the entire city.

The Gevora Hotel has six elevators that will operate at the speed of 26 km/hour. It has a total of 3,859 stairs.

The Gevora Hotel in comparison to its predecessor, Dubai's JW Mariott Marquis Hotel is just one metre shorter with 72-storeys and is 355 metres tall.

The Gevora Hotel record has been confirmed by Guinness Book of World Records.

7th World Government Summit 2019 Being Held In Dubai: Shaping Future Of The World

India elected as the member of ITU council till 2022 And ITU...

3rd MahaBiz 2018 event will be held on October in Dubai