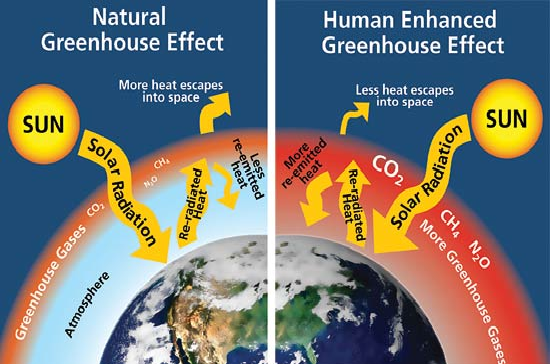 The “greenhouse effect” usually refers to a similar behavior of the earth’s atmosphere. Sunlight shines down through the air and warms the ground. The warm ground reradiates that energy as infrared light.

Depending on the gases in the atmosphere, that infrared light is absorbed by those gases instead of being able to escape out into space. The energy is trapped. Some “greenhouse gases” are particularly effective at absorbing the IR (infra-red) energy and this makes the atmosphere act like a greenhouse, trapping the heat more effectively and raising the temperature of the earth.

Some other greenhouse gases are carbon dioxide, methane, nitrous oxide, and ozone.

All this extra CO2 will help trap heat (via the greenhouse effect), raising the temperature of the earth and in particular the oceans and that will cause a lot more water to evaporate, which will cause the earth to heat up. It’s a rather vicious cycle.

» Lichen Role in the Environment and health of the ecosystem