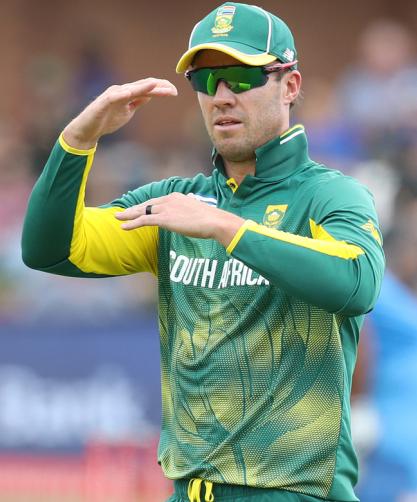 AB de Villiers full name 'Abraham Benjamin de Villiers' also called as ‘ABD’ or ‘AB’ is a South African International cricket player. He had represented his country in all formats of cricket including Test, ODIs and T20.

AB de Villiers has announced his retirement from all forms of cricket with immediate effect on 24th May 2018.

AB de Villiers began his international career as a wicket-keeper/batsman. He was an occasional wicketkeeper until he handed the gloves to debutant Quinton de Kock in 2015.

AB de Villiers was born on 17 February 1984 in Bela-Bela, South Africa to a Christian family. He married his girlfriend Danielle Swart in the year 2013 and has two sons.

AB De Villiers made his international debut in a Test match against England in 2004 and played his first ODI in early 2005. He made his debut in Twenty20 International cricket in 2006.

AB De Villiers was a three-time ICC ODI player of the year, winning the award in 2010, 2014 and 2015. He also holds the record for most Test innings without registering a duck (78).

AB De Villiers has also played for the Delhi Daredevils & Royal Challengers Bangalore in the Indian Premier League (IPL) till 2018. He proved out to be the most valuable player in IPL scoring over 3200 runs.