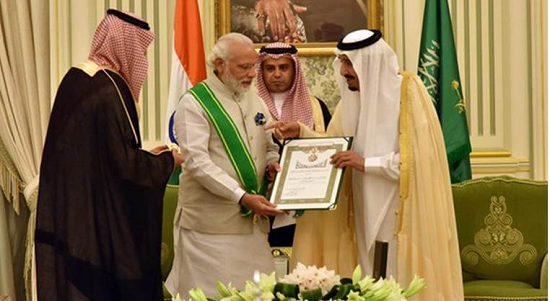 Prime Minister Narendra Modi was awarded the 'Grand Collar' award in Palestine on 10 February 2018. This is Palestine's best honour given to foreign guests.

In September 2018, Prime Minister Narendra Modi was given the UN's highest environmental honour. The United Nations had conferred the 'Champions of the Earth' award jointly to Modi and the French President, Emmanuel Macro on.

It was decided on 24th October 2018 after the meeting of the selection committee held in Seoul-Jung-Y, chaired by the Seoul Peace Prize-2011 Chairman Quan E-Hyok, that the social and economic difference between rich and poor in India To do so Prime Minister Modi has done commendable work by Modinomics, which will give him the Seoul Peace Prize.