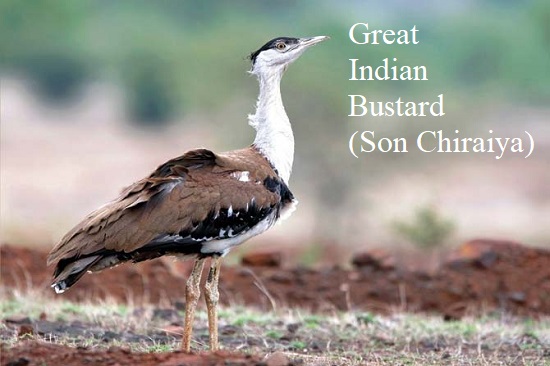 Great Indian Bustard or Son Chiraiya are large brown-and-white bustard with black crown and wing markings. Males have whitish neck and underparts with narrow black breast-band. Females have greyer neck and typically no or incomplete breast-band. Their height is about one meter, Females are shorter than Males.

They are spread mainly in Rajasthan, Gujarat, Karnataka, Andra Pradesh, Tamilnadu. The great Indian bustard inhabits dry grasslands and scrublands on the Indian subcontinent its largest populations are found in the Indian state of Rajasthan In rest of the state, their population significantly low.

A critically endangered species, the GIB, is listed under India’s Wildlife (Protection) Act 1972 which seeks to ensure the highest possible protection to it but this remained on paper only. Over the past few decades, the GIB has consistently faced threats like industrialisation and mining.

The biggest threat to this species is hunting, which is still prevalent in Pakistan. They are large in size, the primary issue of their mortality due to collision with electricity and transmission lines. Their survival is also threatened by stray dogs which are known to attack the bustard’s eggs and young ones.