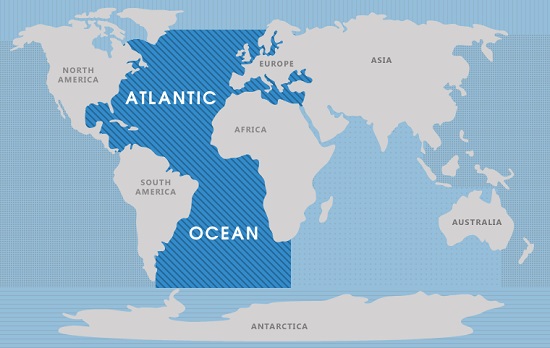 Illustration of submarine relief in the Atlantic Ocean

The Atlantic Ocean covers approximately one-fifth of the earth’s surface separating the continents of Europe and Africa to the east from those of North and South America to the west.

The bottom of the Atlantic ocean is extremely uneven and has submarine ridges, deep basins, isolated seamounts, deep basins, and canyons. The Mid-Atlantic Ridge, longest of the underwater ranges, is roughly in an S-shaped curve running for about 10,000 miles. On either side are broad, deep basins, amongst which, North American, Guinea, Labrador, Brazilian, and Argentine are on the west and Norwegian, West European, Canary, Cape Verde, Guinea, Angola, and Cape basins lie on the east.

Excluding a few areas, the Atlantic Ocean is characterized by a broad continental shelf all around and the shelves of North Atlantic are almost broad and flat everywhere. The continental shelf reaches seaward about 250 miles southwest of England, 300 miles southeast of Newfoundland and 400 miles off southern Argentina. Along Africa through the shelf is much narrower.

The place where the ocean floor drops steeply, beyond the shelf is the continental slope. Some of the areas have deep, narrow canyons cut into the shelf and slope. Three-fourth of the ocean bottom is covered with deep-sea sediments of which most are soft sediments made of shell and remains of microorganisms.

There is a general absence of linear deeps since there are no fold lines along the coast. There though are deep-sea trenches or troughs. The deepest is the Puerto Rico Deep at 4812 fathoms. Some other are in the vicinity of West Indies, one near South Sandwich Island etc.

What is the impact of ocean Deoxygenation? At 100% saturati...

» Lichen Role in the Environment and health of the ecosystem