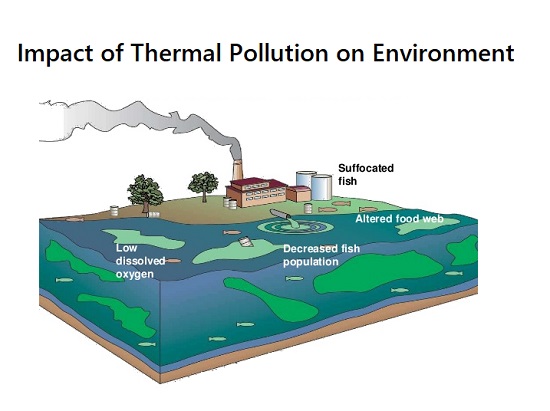 What is Thermal Pollution? How it affects Living being health?

Thermal pollution is a process that eliminates or decreases the quality of water by increasing the temperature of its surroundings. By which the temperature increases. This thermal, nuclear, nuclear, coal factory, oil field generator, is to use cooling water from various industrial plants such as factories and mills.

After using coolant water by power plants and industrial manufacturers, when the water reaches the natural environment, its temperature is high; due to changes in temperature, the amount of oxygen decreases, due to which the negative effect on the ecosystem Does Matter. For example, due to the lack of oxygen content, survival of aquatic organisms can be difficult.

2. Changes in water quality
A high temperature of the water changes the physical and chemical properties of water. When the viscosity of the water decreases, the vapour pressure increases rapidly.

3. Increase in Toxicity
The concentration of the pollutant is the factor in the increase in the temperature of water, due to which the poisoning in the water increases the toxicity. Which can increase the death rate of aquatic life.

4. Interference in biological activities
Temperature changes interfere with the entire aquatic ecosystem because changes in temperature can change the biological process such as respiratory rate, digestion, immersion, and the development of aquatic organisms.