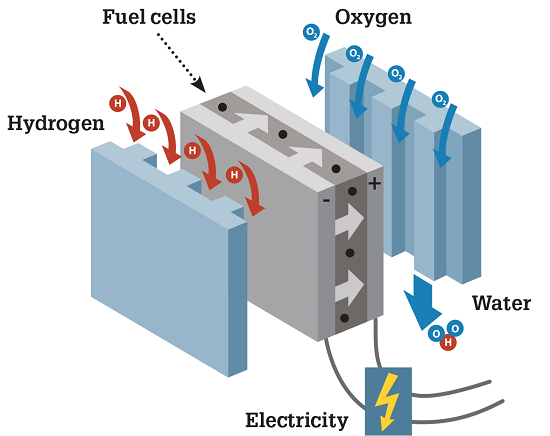 First invented in 1838 and then later used by NASA to power space shuttles and rockets, a fuel cell uses fuel source and either air or water to produce electricity. This can be used to provide electrical energy for buildings and other structures.

The chemical reaction between hydrogen and water does not produce pollution but instead, releases electricity to be used in various applications(Carbon-emission Free).

Hydrogen fuel is used to launch space shuttles, making it a significant factor in science and technology. Hydrogen fuel cells have many applications and are being used by industries, machinery, motorcycles, automobiles, and NASA.

when hydrogen fuel cells are used in manufacturing plants, electricity produced can reach up to 65 percent. the fuel consumption is cut down to 50% with the use of fuel cells. This is because cars using hydrogen cells only use 40% to 60% of the energy generated by the fuel as well as operate quietly and less moving parts.

Hydrogen is the most abundant element on the earth.

Fuel cells are a clean way to produce power.

There are more than 30 commercial hydrogen station in colifornia today.

Fuel cells can be used to  power several application.