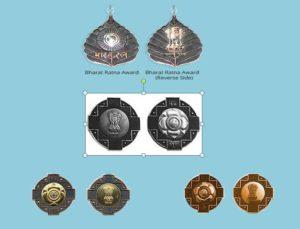 Civilian awards are the stand for those people who do good work in fields of Art, literature and education, sports, medicine, social work, science and engineering, public affairs, civil service, trade, and industry etc.

Bharat Ratna is the highest national civilian award given by the Republic of India for the good work in the field of Science, Art, Literature, Sports etc.

Bharat Ratna Awards was established on 2nd January 1954. A Sanad (certificate) signed by the President of India Babu Rajendra Prashad and medallion is presented at the time of distribution of award.

Sports is the latest category that has been added to the list of the field by making amendments in 2013.

The first recipients of the Bharat Ratna award in 1954, C. Rajagopalachari, Dr. S Radhakrishnan and Dr. CV Raman. They were given the award in the year 1954 at the time of initiation of the award.

Padma Vibhushan is the second highest civilian award and is given to people from the various field like Art, Science, public services and also to government employees.

The Padma Vibhushan award was started in 1954 with S N Bose, Nand Lal Bose, Zakir Hussain, B G Kher and V K Menon and J D Wangchuk were the persons who first recipients of the award.

The Padma Bhushan is the third highest civilian award of India. It comes second in under the list of Padma Award. This award is given for distinguished service of a high order.

Padma Shri is the last and fourth highest civilian award in India which is announced on republic day every year.

The awards are given to distinguished people including Art, Education, Industry, Literature, Science, Sports, Medicine, Social Service and Public Affairs.