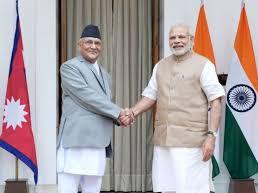 India and Nepal have tied to construct strategic railway link between Raxaul in Bihar and Kathmandu in Nepal in order to strength people-to-people (P2P) contact and bulk movement of goods.

As per the official statement, the new electrified rail line between the Bihar’s border city of Raxaul in India and Kathmandu in Nepal. The project will be financed by India’s support.

As per the official statement, this is the first step towards building railway connectivity. India in consultation with Nepal will complete preparatory survey work in 1 year.

In 2016, China also signed a transit trade treaty with Nepal that completely depends on Indian sea-ports for third-country trade. Apart from this, China is also building three highways connecting Nepal and these roads are expected to be ready by 2020.