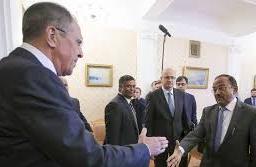 India and Russia on their talks discussed issues as a part of regular contacts between the two countries' & security councils.

Elaborating opening remarks during talks with Doval, Russian Foreign Minister Sergei Lavrov said that focusing on strengthening the bilateral ties, the economic ties between both the nations are growing. Apart from this, a mechanism is being developed to further liberalise trade both bilaterally and as part of India's cooperation with the Eurasian Economic Union.

Russia- India- China (RIC) format, BRICS and now the SOC, India actively and full-fledged been a member since last year. All these allow the nations to closely interact and coordinate our approaches in the UN and various military and political security mechanisms in the Asia-Pacific region.