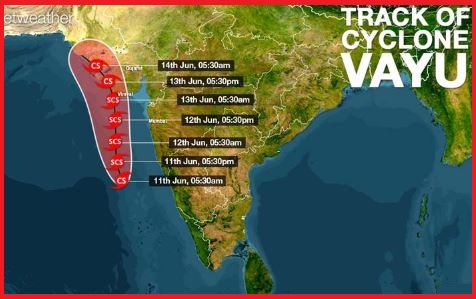 IMD Warns of 'Cyclone Vayu' to get disastrous in 24 hrs in Gujarat: Details, Features, Origin

Cyclone Vayu was originated over the east-central Arabian Sea at 11:30 pm on 10th June 10, 2019, and is centered about 460 km north-northwest of Aminidivi (Lakshadweep), 540 km south-southwest of Mumbai (Maharashtra) and 690 km south of Veraval (Gujarat).

Coastal areas of south Gujarat have kept on alert as Cyclone Vayu continues to intensify and may cross the Gujarat coast between Porbandar and Mahuva around Veraval and Diu early morning on 13th June 2019.

Cyclone Vayu will cause the wind speed beyond 110-120 km per hour, as per the current IMD forecast.

Cyclones in the Arabian Sea are not as intense as those formed over the Bay of Bengal, which also tends to form over a longer duration.

A ‘red’ warning for heavy and widespread rainfall has been issued for the Saurashtra and Kutch regions for 13th June 2019.

Coastal areas of Porbandar, Junagarh, Gir Somnath, and Amreli districts are likely to be inundated with a storm surge of height of about 0.5 m above the astronomical tides at the time of landfall.

» Causes and effects of cyclones