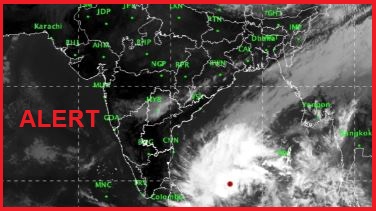 Cyclone Pethai has emerged as a deep depression in the Bay of Bengal around 900 km off Chennai on 15 December 2018.  It was expected to bring heavy rainfalls in the coastal areas of north Tamil Nadu, Andhra Pradesh, Chhattisgarh, and Odisha.

The storm is likely to further develop into a severe cyclonic storm in the subsequent 24 hours and may hit Andhra Pradesh on Monday. As the depression develops into a cyclonic storm, it will be named Phethai.

» The Himalayan Viagra (Caterpillar Fungus) Under Threat From Climate Change