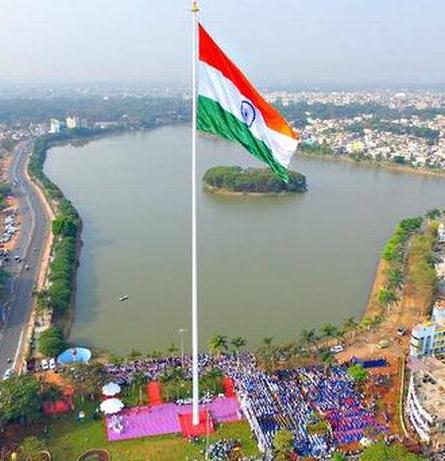 India’s largest national tri-colour flag hosted on the tallest flag post was inaugurated on 12th March 2018 at Belagavi in Karnataka.

The Belagavi City Corporation (BCC) has completed the work of the flag post.

The tallest flag post is situated at Kote Kere which is near the historic Belagavi Fort in Belgaum, Karnataka.

The 110 m flagpole is 2 m in diameter at the base and 0.6 m at the top. It has a three horsepower motor to raise the flag to the top.

The 9,600 sq.ft flag is made of weatherproof Denier Polyester Fabric. Two shorter poles with flood-lights have been erected around the flag.

The tallest flag will be unfurled at all times and will be well-lit at night. It can be easily seen by the residents of Belagavi from afar and remain visible at all times.

Now, the Belagavi city new flag post has become the tallest one in India leaving the flag post behind of the Indo-Pak border at Attari which is of 109.m.

» Fort/Barracks: A place, where soldiers live and work