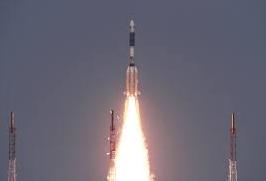 The GSLV-F08 mission carrying the GSAT-6A communication satellite took off from the Andra Pradesh's Sriharikota spaceport near Chennai on 29th March 2018.

The GSAT-6A communication satellite was successfully placed into a geosynchronous transfer orbit at an altitude of around 35,900km.

The 2,140-kg satellite, which cost around Rs.270 crores, is believed to be particularly useful for armed forces stationed in remote corners of the country as it will be able to send and receive signals from hand-held devices.

The GSLV-F08 rocket saddled with the passenger satellite in its payload fairing took off from the second launch pad at 4.56 PM from Sriharikota space port. The launch saw quelled of smoke left behind the 49.1-metre tall GSLV glided powerfully into the clear sky.

The GSLV-F08 rocket also has a new engine will ISRO anticipates to use for its Moon mission.

The GSAT-6A is like the GSAT-6, which was launched earlier in 2015. It is indigenously high power S-band communication satellite built on I-2K satellite bus with a mission life of about ten years.

Both the two rockets in tandem will provide signals that that would allow the two-way exchange of data even from very remote locations of India.