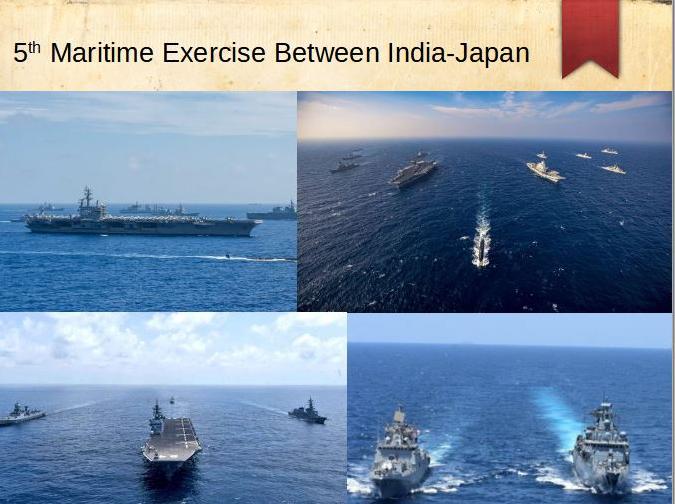 From October 6 to 8, the fifth iteration of the bilateral maritime exercise JIMEX between Japan and India was held in the Arabian Sea. The Japanese Maritime Self-Defense Force (JMSDF) and Indian Navy (IN) ships and aircraft engaged in a high-tempo of operations centered on the air, surface, and sub-surface aspects of maritime operations, as well as the air domain, during the exercise.

The India is participating with the indigenous Guided Missile Destroyer INS Kochi (with Sea King MK 42B helicopter) and the Guided Missile Frigate INS Teg under the direction of RAdm Ajay Kochhar, Flag Officer Commanding Western Fleet (with SAR capable Chetak helicopter). A P8I, a shore-based maritime surveillance aircraft, and MiG 29K fighters are also on the IN's roster. RAdm IkeuchiIzuru, Commander, Escort Flotilla Three, which includes the Izumo Class Helicopter Carrier Kaga and the Guided Missile Destroyer Murasame, leads the JMSDF. Both ships have inbuilt SH60K helicopters on board.

The forces practiced a War at Sea scenario right from the outset, with P8I (IN) providing maritime reconnaissance support to both navies. Between Kaga and Kochi, the units performed Replenishment at Sea approaches and fuel rig connect-ups. Complex Over the Horizon Targeting exercises and surface gun fires on an expendable target was also part of the exercise. An advanced synchronized anti-submarine exercise involving an underwater target deployed by JMSDFsaw surface units and IN's P8I aircraft. During flying operations, Flag Officers from both forces met on the flight decks of Kochi and Kaga, in keeping with the real spirit of the alliance.

The precision, coordination, and high level of interoperability demonstrated not only the two fleets' high levels of professionalism and preparedness to tackle threats at sea, but also the high level of trust and understanding they had developed through time. The complicated maritime exercises will allow the two navies to expand their existing extensive strategic collaboration and, where necessary, jointly secure their maritime interests and preserve regional peace, security, and stability.

RIMPAC 2018: India Among 26 Countries To Participate In Biennial Exercise In US

» First Made In India Aircraft carrier, Vikrant, DRDO, About, Detail