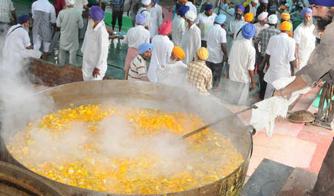 Ministry of Culture, Government of India has launched a new scheme named as ‘Seva Bhoj Yojna’ for charitable religious institutions.

The Seva Bhoj Yojna scheme main objective is to limit or control the financial burden of such Charitable Religious Institutions who provide Food/Prasad/Langar (Community Kitchen)/Bhandara free of cost without any discrimination to Public & Devotees.

The Seva Bhoj Yojna scheme envisioned to reimburse the Central Government share of Central Goods and Services Tax (CGST) and Integrated Goods and Service Tax (IGST) on the purchase of food raw items used for the preparation of temple offerings.

The Charitable Religious Institutions such as Temples, Gurudwara, Mosque, Church, Dharmik Ashram, Dargah, Matth, Monasteries etc. which have been in existence for at least five years are eligible for the proposed scheme.

Under the ‘Seva Bhoj Yojna’ scheme, all eligible institutions have to register themselves with Darpan portal along with supporting documents which will be examined by the Ministry's committee thereafter Institutio can avail this scheme.

Ministry of Culture adopts 10 monuments under the ‘Ado...

Ministry of Culture: List of winners of Tagore Award for Cultural Harmony

Ministry of Culture announces winners of Tagore Award for Cu...

Ministry of Culture: Four MoUs signed under ‘Adopt a H...