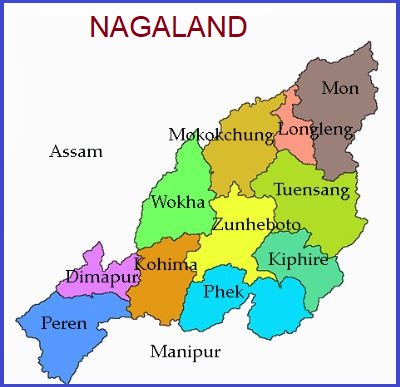 Nagaland is a state in northeastern India. It's capital name is Aizawl. It was commissioned to Indian Union on 1st December 1963.

Nagaland is the southernmost lying in the hills and mountains of the northeastern part of the country. It is one of the smaller states of India.

Nagaland is bordered by the Indian states of Arunachal Pradesh to the northeast, Manipur to the south, and Assam to the west and northwest and the country of Myanmar (Burma) to the east.

Nagaland has a monsoonal (wet-dry) climate. Annual rainfall averages between 70 and 100 inches and average temperatures decrease with greater elevation

Nagaland is an ideal destination for trekking, rock climbing, and jungle camping.

Platinum Jubilee Commemoration of the Battle of Kangla Tongb...

Nagaland Singphan Wildlife Sanctuary declared as the 30th re...