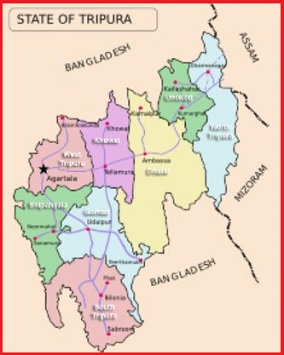 Tripura is a state in northeastern India. Its capital name is Agartala. It was commissioned to Indian Union on 21 January 1972.

Tripura is bordered to the north, west, and south by Bangladesh, to the east by the Indian state of Mizoram, and to the northeast by the state of Assam. It is among the smallest of India’s states

About two-thirds of the people in Manipur are Meitei (Meetei), who occupy the Manipur valley and are largely Hindus.

Tripura registers about 80 inches (2,000 mm) of rainfall, most of which is brought by the monsoon, which generally blows from June to September. North-central Tripura usually receives the most rainfall; the southwestern region typically receives the least.

Tripura has five anticlinal ranges of hills running north to south, from Boromura in the west, through Atharamura, Longtharai, and Shakhan, to the Jampui Hills in the east.

Tripura's BJP government decided to deal with the crime rela...