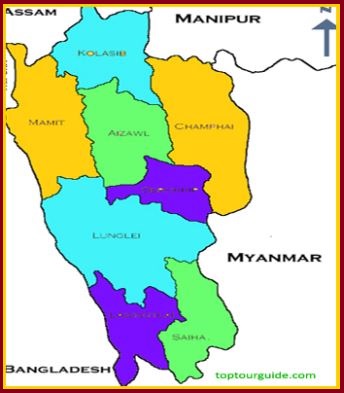 Mizoram is a state in northeastern India. It's capital name is Aizawl. It was commissioned to Indian Union on 20 February 1987.

Mizoram is bordered also shares a 722-kilometer border with the neighboring countries of Bangladesh and Myanmar. It has 8 districts and covers an area of 10,491.69 square kilometers (4,050.86 sq mi)

The word “Mizo” means highlander. The state of Mizoram is a storehouse of exotic flora and fauna. The hills here could be seen covered with bamboo and banana trees along with a wonderful array of pine trees

Mizoram (“Land of the Mizos”) was known as the Lushai Hills District of Assam before it was renamed the Mizo Hills District in 1954. In 1972 it became a centrally administered union territory under the name of Mizoram, and in 1987 it achieved statehood.

Phawngpui Peak rising about 2157 meters high near the Myanmar border in Chhimtuipui District. It is famous for orchids and rhododendrons.