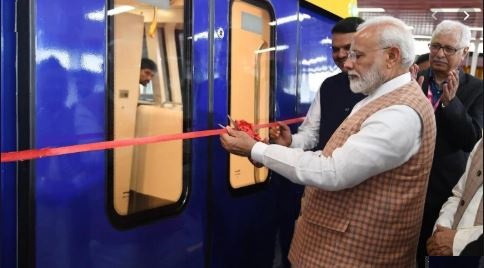 The three Metro corridors are believed to carry more than 40 lakh commuters daily and is expected to be operational from 2031.

The three metro projects were launched with vision ‘Mumbai in Minutes’.

PM Modi also laid foundation stone of the state-of-the-art Metro Bhavan which is a 32 storey centre and would control 14 metro lines around 337 km radius. It would be constructed on the 20,387 square meter plot with buildable area 1,14,088 square meters.

The metro coach was made in a record time of 75 days with a design speed of 90 kmph and an operational speed of 80 kmph. It was designed by Bharat Earth Movers Ltd(BEML) in Mumbai.

Bandongri Metro Station in Kandivali East of Maharashtra was inaugurated by PM Modi.

» PM Narendra Modi to be honored for Swachh Bharat Abhiyaan