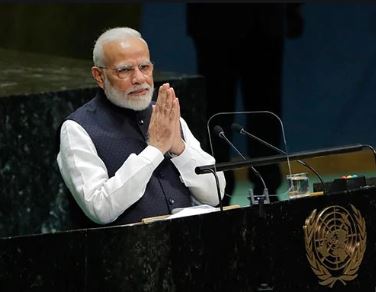 Prime Minister Narendra Modi addressed at the 74th session of the United Nations General Assembly (UNGA) on 27th September in New York, US.

PM Narendra Modi emerged out as a "Statesman", supporting India's move about the schemes & initiatives launched in the past 5 years.

PM Modi started his speech with the message of 'Vasudhaiva Kutumbakam' to the world, by saying the famous Tamil poet Kanyan Pungundaranar 'Yadhum Ore Yavarum Kelir' .

1. Swachh Bharat Abhiyan in India where over 11 crore toilets have been constructed in the last 5 years to make India Open Defecation Free (ODF).

3. PM Modi informed for Financial Inclusion where in the last 5 years, over 37 crores account for poor people have been opened in the banks.

4. PM Modi told about the discontinuation of the use of Single-use plastic from India.

5. India's strength is in its culture.

7. PM Modi talked about the Government's aim towards global friendship and welfare.

9. PM Modi also threw light upon the growth of technology and its impact on the economy, safety, connectivity, and international relations.

10. PM Modi concluded his speech by giving the message of harmony and peace but no dissension which was once given by Swami Vivekanand at the World Parliament of Religion.

PM Narendra Modi also called out the world leaders to unite against terrorism.