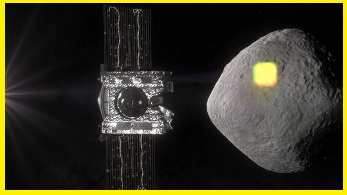 Asteroid Bennu is too small to have ever hosted liquid water, but this finding does indicate that liquid water was present at some time on Bennu’s parent body, a much larger asteroid.

These hydroxyl groups exist globally across asteroid in water-bearing clay minerals, indicating that at some point Bennu’s rocky material interacted with water.

Asteroid Bennu is near-Earth carbonaceous asteroid about the size of a small mountain in the Apollo group. It was discovered in September 1999 by the LINEAR Project.

Asteroid Bennu is one of the oldest known asteroids which is considered as a remnant from early in the formation of the solar system and orbits close to Earth’s path around the Sun.

Asteroid Bennu is a carbon-rich asteroid and believed to be the type of asteroids that may have chemical building blocks of life, along with lots of water.

So, analysis of a returned sample from it could help to reveal key insights about the early solar system and the origin of life on Earth. It is a potentially hazardous asteroid and there is a very slight chance it could strike into Earth in the late 22nd century.