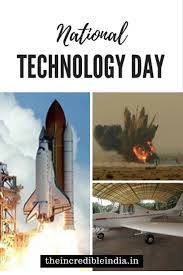 National Technology Day was observed across India on May 11 to mark India’s technological advancements and to promote the development of technology in various fields.

The National Technology Day-2018 official theme for this year is “Science and Technology for a Sustainable Future”.

National Technology Day also commemorates to celebrate the anniversary of first of the five nuclear tests of Operation Shakti (Pokhran-II) Nuclear test, held from 11th May 1998 to 13th May 1998 in Pokhran, Rajasthan.

The first nuclear test Pokhran with a code=named as ‘Smiling Buddha’ was carried out in May 1974.

Operation Shakti was led by former President Late APJ Abdul Kalam, who was then Director of Defence Research and Development Organisation (DRDO).

After conducting nuclear tests as part of Pokhran-II, India was declared as a nuclear state by then Prime Minister Atal Bihari Vajpayee, making it sixth nation to join ‘nuclear club’ of nations as well as the first country which was not a part of Non-Proliferation of Nuclear Weapons Treaty (NPT).

Trishul Missile got inducted by Indian Army and Indian Airforce. Moreover, Hansa 3, India’s first indigenous aircraft was also first tested on 11th May 1998, in Bangalore. It was first of its kind general aviation two-seater plane used for flight training as well as personal flying

Hansa -3, India’s first indigenously designed and produced aircraft took its maiden flight on this day (11th May 1998) in Bengaluru.

Hansa-3 aircraft, which had a cruising speed of 213 kmph and a range of 842km, was used in the flying institutes for sports, pilot training, aerial photography, surveillance and projects related to the environment.