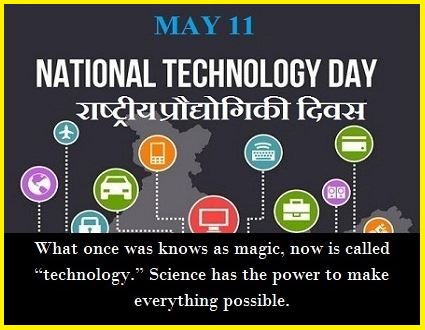 National Technology Day is celebrated every year on 11th May across India to mark India’s technological advancements and to promote the development of technology in various fields.

National Technology Day official theme for the year 2019 is “'Science for people and people for Science”.

To commemorate National Technology Day, Technology Development Board (TDB) has instituted National Award. This award is conferred on to various individuals and industries by the President for their successful achievement in the commercialization of Indigenous Technology.

National Technology Day is also commemorated to celebrate the anniversary of first of the five nuclear tests of Operation Shakti (Pokhran-II) nuclear test, held from 11 to 13 May 1998 in Pokhran, Rajasthan.

The operation was led by former President APJ Abdul Kalam, who was then Director of Defence Research and Development Organisation (DRDO). After conducting nuclear tests as part of Pokhran-II, India was declared as a nuclear state by then Prime Minister Atal Bihari Vajpayee, making it sixth nation to join ‘nuclear club’ of nations as well as the first country which was not a part of Non-Proliferation of Nuclear Weapons Treaty (NPT).

India’s first indigenous aircraft was also first tested on 11 May 1998, in Bangalore. It was first of its kind general aviation two-seater plane used for flight training as well as personal flying.

Based on these historical, groundbreaking achievements by Indian scientists, engineers, as well as technicians, 11 May was declared as the National Technology Day.

» World Password Day Celebrations On 1st Thursday of May Every Year